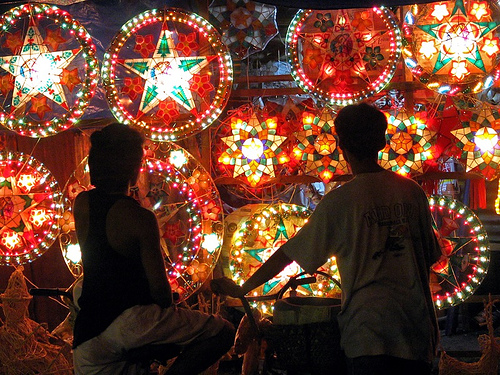 The Filipino Parol (pah-Rol) or Christmas lantern is one of the most-loved Christmas decorations in the Philippines, an iconic symbol during the holiday season and which can be found in almost all Filipino homes, offices and street corners. The Filipino Parol is supposedly adapted from the Chinese lantern and the Mexican piñata to symbolize the Star of Bethlehem

Although nowadays there is a range of Filipino Christmas lanterns made of various materials, the parol made of bamboo frames can be considered as the most distinct or unique to the Philippines. Made of bamboo sticks fastened together to form a star, colored crepe paper are cut into strips and wrapped around the bamboo frame to form a gaily-colored star. Electric lights are added or draped around the star for evening use.

Another but more expensive variant is the parol made of heat-resistant plastic filaments and often sold along the intersection of Sen. Gil Puyat and the South Superhighway. Made in Pampanga these lanterns boasts of intricate colors and patterns, and are easy eyecatchers. Also another  popular parol is one made of Capiz shells, the wafer-thin pearly, opaque shells used in traditional window frames. Colored and with an electric bulb installed inside, the Capiz parols are more durable but pricier than the cheaper bamboo-framed lanterns.