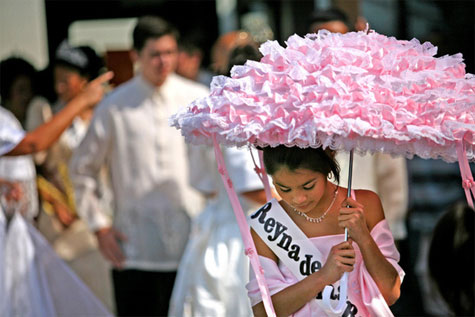 Flores de Mayo is a Catholic festival held in the Philippines in the month of May. It lasts for a month, and is held in honour of the Virgin Mary. The Santa Cruzan is a parade held on the last day of Flores de Mayo in honour of Reyna Elena (Wikipedia).

Flores, from the Spanish word for “flowers,” also known as Flores de Mayo (Flowers of May), Flores de Maria (flowers of Mary) or alay (offering), and may refer to the whole Flower Festival celebrated in May in honour of the Virgin Mary. It was believed that “Flores” (short term for Flores de Mayo)  originated from the historical town of Malolos in Bulacan province in 1865, when the young girls made a floral offering to the Virgin Mary in the parish church.

The Santa Cruzan procession is followed by the steady beat of the rondalla, playing and singing the Hail Mary in Spanish (“Dios Te Salve”). The devotees walking with the procession hold lighted candles in their hands and sing the prayer as they go along.

After the procession, there is a pabitin (a bamboo trellis) that serves as a culminating activity for all the children to enjoy. The pabitin dangles candies and sweets for children to snatch or pick. It is customary for men attending the Santacruzan to wear the traditional Barong Tagalog and for women to wear any Filipiniana-inspired dress.