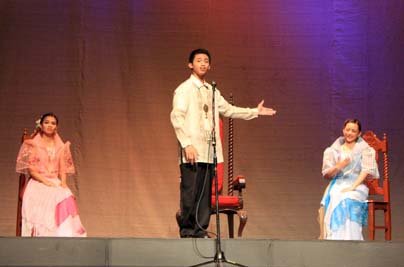 The balagtasan is a Filipino poetic form and was invented and performed during the American occupation of the Philippines. The balagtasan honored Francisco Baltazar (also known as Balagtas), giving his name to this form of versifying. Balagtas is the 19th century Filipino author of the Filipino epic narrative poem Florante at Laura.

As a literary form, the balagtasan was based on a traditional Filipino form of debate in verse that was popular at that time. This popularity partly accounts for its success as entertainment until after World War II.

However, the balagtasan was also the product of a nationalist and anti-colonial impulse in Filipino vernacular literature during the early 20th century. The balagtasan was used by Filipino writers and poets to express the most progressive and current political ideas then and to comment on contemporary social issues.  Although performances or the staging of balagtasan debates faded in contemporary literary practice, the versifying is undergoing a revival of sorts these days with young poets writing in Filipino.