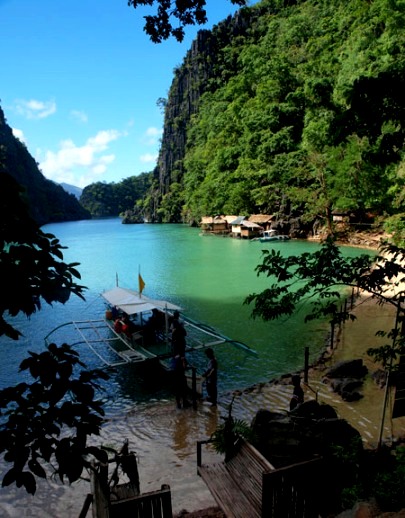 Kayangan Lake,  located at Coron Island, Northern Palawan, is one of the popular attractions in Coron and is considered to be the cleanest lake in the Philippines.

Sometimes called the Blue Lagoon, this freshwater lagoon is set amid sheer limestone cliffs.  Visitors to the lake walk up a mountain trail to see this postcard-pretty lake with its underwater rock formations, clear turquoise waters and the cliffs that enclosed this natural gem. The native Tagbanuas are the original settlers in this region and park fees collected from visitors are supposedly to benefit the local Tagbanuas. The Tagbanuas were the first ethnic tribes in the Philippine to win ancestral claim in the late 1990s over the group of Coron Islands including the sea, considered a legal first in Philippine jurisprudence.

Despite their control, the Tagbanuas failed to stop the encroachment of mass tourism and the noise of motored boats and tourists are largely frowned upon by the Tagbanuas as they believe that the noise disturbs the balinsasayaw or swiftlet, the tiny bird that nests in the island’s caves.

The edible birds’ nests are the source of livelihood for Tagbanua fishermen who gather them starting December when the northeasterly (amihan) wind blows and keeps the inhabitants inland. The Tagbanua scale the jagged limestone cliffs toward cave entrances high above the sea. They would then make the stealthy and treacherous descent into the dark caves to gather the nests which they sell to Chinese traders in town.

Photographing the lake can be quite challenging as the best panoramic views of the lake are often taken from high angles, and with the steep mountain trails and vegetation one has to be ready to climb trees and rocky outcroppings to get the best shot. (From: Various Internet Sources)