Mount Pinatubo, located in the borders of the provinces of Zambales, Tarlac, and Pampanga in southern Luzon island in the Philippines, is known for the second largest volcanic eruption in the 20th Century when it exploded in June 1991.

Before the 1991 eruption, Pinatubo was a dormant volcanic and was hardly known, literally lying low under the shadow of the more prominent Mt. Arayat. Pinatubo’s eruption led to the evacuation of thousands of Filipinos living in the affected areas where whole villages were buried in the ash, lahar and mudflows.

The eruption, measured at VEI (Volcanic Eplosivity Index)  of  6, has also accomplished in 1991 what the Philippine government and politicians have failed to do, namely, the closure of the controversial and highly divisive issue of the US military bases in Clark (Pampanga) and Olongapo in Zambales province. At the time of the explosion pro-US Philippine politicians were actively campaigning to extend or at least allow US military presence in the country.

What was once an inconspicuous but densely-forested mountain before the 1991 eruption is now a barren, ash covered and rocky landscape. Popular among mountain trekkers, climbers and other nature adventurers, Mt..Pinatubo attracts its regular share of visitors. Local government officials, however, warn of dangerous mudslides during the rainy season when rivers overflow and narrow trails are occasionally buried in landslides, incidents which have claimed lives of unwary adventurers and foreign tourists in recent years.

The mountain was also home to one of the Philippines’ aboriginal settlers, the Aetas, which have fled and were made homeless after the eruption. During the eruption many of the Aetas hid in caves on the slopes of Pinatubo and hundreds were killed, leading to some Aetas feeling that their god, who they believe live in Mt. Pinatubo, has betrayed them. The 1991 eruption was also preceded by a strong earthquake in the area in July 1990 measured at a magnitude of 7.7 in the Richter scale, comparable in area size to the 1906 San Francisco earthquake or this year’s earthquake in Haiti.

Visitors to Pinatubo are rewarded with stark views of and dramatic landscapes of ash fields, mountain lakes and the devastation that nature leaves on its wake when it awakens and unleash its full power.

Mt. Apo is the Philippines’ highest peak and is actually a dormant volcano. A favourite for both local and foreign mountain climbers, Mt. Apo is 2,954 meters high (9,692 ft) and is located in Davao Province in Mindanao, southern Philippines.

Trekkers to the slopes of Mt. Apo are rewarded with forests of varied flora, steaming geysers, rainwater lakes, waterfalls and rivers. Mt. Apo is also known as the largest habitat of the endangered Philippine Eagle, one of the world’s tallest and biggest eagle species at one meter high and with a wing span of about 2.5 meters. Waling-waling, a rare Philippine orchid of exceptional scent and beauty, also thrives in the jungles of Mt. Apo.

Six ethnic tribes live in Mt. Apo and the mountain is a sacred place for the 450,000 Lumad tribal people who considers Mt. Apo as their last remaining home. On the base of Mt. Apo is the Science Foundation, an agricultural foundation where visitors can bird-watch, and the Philippines Eagle Nature Center which provides temporary shelter to eagles in captivity and numerous other bird species, animals and tropical plants.

Environmental pressures on Mt. Apo include a geothermal power plant that some conservationists say could lead to the development of settlements and commercial areas. Whether this assertation has factual basis is under debate (See Reader’s Comment and rejoinder below). There are more than 7,000 families occupying 258 square-kilometres within the park and much of this area is used for shifting cultivation, another major threat. Illegal logging and bounty hunters who pan for gold are also threats to Mt. Apo’s eco-system 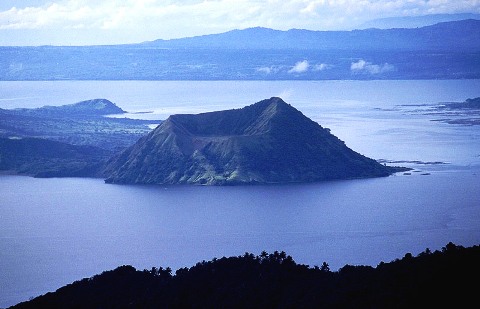 Taal Lake and Volcano is one of the most accessible sights that first-time visitors to the Philippines can visit. The lake and volcano can be viewed or reached from the towns of Talisay and San Nicolas in Batangas province, Northern Luzon island.

The volcano complex, one of the most active in the Philippines, consists of an island in Lake Taal, which is situated within a caldera formed by an earlier, very powerful eruption. Taal Volcano has erupted violently several times over the last 300 years with the current death toll (ref: Wikipedia) estimated at 5,000 to 6,000 people. The volcano was once considered as “a volcano inside a volcano” because people believed that the lake that circles the volcano was once a crater or mouth of a volcano.

One of the most popular views of the lake and volcano is from the Tagaytay Ridge which is about 50 kilometres south of Manila. The best viewing times are at early morning or late afternoon when the morning mist or the afternoon sunset impart a breathtaking, panoramic view of the surrounding mountains and shoreline. Tagaytay Ridge is also known for its roadside fruit vendors where native fruits and sweets are arranged and sold to passing tourists.

For the more adventurous and those with plenty of time, a trek or a donkey ride to the volcano itself is worth the effort. Hiring an outrigger boat from Talisay or joining a group excursion to the volcano are the most convenient options. Visitors will be rewarded with a fun  donkey ride and an awesome view of the volcano’s caldera.