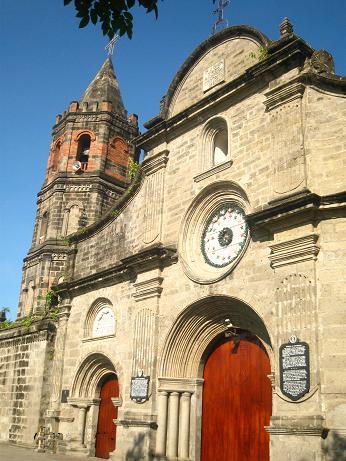 Barasoain Church (also known as Our Lady of Mt. Carmel Parish) is a Roman Catholic church built in 1630 in Malolos City, Bulacan. Having earned the title ‘Cradle of Democracy in the East,’  Barasoin is the site of the First Philippine Republic.

Founded by Augustinian Missionaries in 1859, the church is also renowned for its architectural design and internal adornments. The original church was burned during the outbreak of the Philippine Revolution and underwent renovation.

The church was designated a National Shrine on August 1, 1973. Unusual for newly elected presidents in the Philippines, the church has been a venue in the official oath-taking of General Emilio Aguinaldo and former president Joseph Estrada.

Built in 1851 by the Franciscan Missionaries, the Nagcarlan Underground Cemetery in Lgauna province is the only one of its kind in the Philippines and was used as exclusive burial ground for Spanish friars.

Made of a circular stone structure, the cemetery has an intricately designed wrought iron-gate on the red-tiled walk that crosses the grounds leading straight to the opposite side, where an altar-like structure is located. The tombstones are embedded on the brick walls of the cemetery.

At the crypt of the cemetery, according to historical records, is where the Katipuneros plotted against Spanish rule. The historic  Biak-na-Bato pact was first planned by Pedro Paterno and Gen. Severino Taino of the Maluningning command during their secret meeting in this cemetery in 1897.