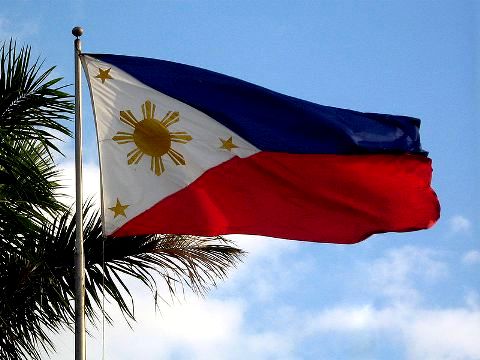 The national flag of the Philippines is a horizontal bicolor with equal bands of royal blue and scarlet red, and with a white equilateral triangle at the hoist. In the center of the triangle is a golden yellow sun with eight primary rays, each containing three individual rays; and at each vertex of the triangle is a five-pointed golden yellow star. This flag can indicate a state of war if it is displayed with the red side on top.

The Philippine Government “Flag and Anthem” web page states that the white triangle stands for equality and fraternity; the blue field for peace, truth and justice; and red field for patriotism and valor. The three stars symbolize Luzon, Visayas, and Mindanao, while the 8 rays represent the 8 provinces that took part in the initial revolution against the Spanish. Ambrosio Rianzares Bautista, who wrote the Philippine Declaration of Independence and who read it on the occasion of its proclamation on June 12, 1898, has listed the eight provinces as Manila, Cavite, Bulacan, Pampanga, Nueva Ecija, Bataan, Laguna, and Batangas, saying that these eight were declared in a state of war almost from the start of the revolution. (Source: Wikipedia)