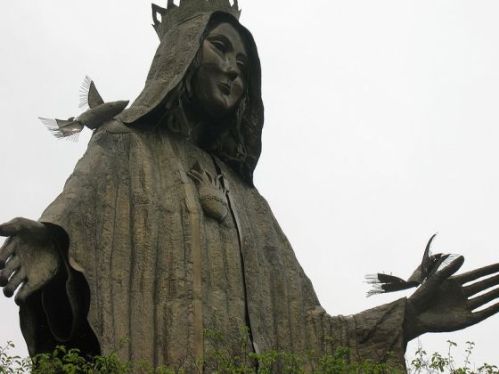 The Shrine of Mary, Queen of Peace, Our Lady of EDSA, or more popularly, the EDSA Shrine is a small church of the Roman Catholic Archdiocese of Manila located at the intersection of Ortigas Avenue and Epifanio de los Santos Avenue (EDSA) in Quezon City.

The shrine was built in 1989 originally to commemorate the memories of the People Power Revolution and its peaceful outcome. The shrine and the small church stand on the site of two peaceful demonstrations that toppled Philippine presidents Ferdinand Marcos (the People Power Revolution or EDSA I) and Joseph Estrada (the EDSA Revolution of 2001 or EDSA II). It is officially called the “Shrine of Mary, Queen of Peace” or “Our Lady of Peace Quasi-Parish”, although these names are seldom used.

The Statue of Mary triggered a minor controversy when it was first unveiled in 1989 due to its mammoth proportions, and what its detractors say the lack of ‘gracefulness’ in terms of line. It earned the humorous nickname ‘Daing Lady’ probably due to its shape that recalls the daing or dried fish, a fish staple for many low-income Filipinos. The EDSA Shrine is part of the Ortigas Center, a complex of office buildings and commercial centers that occupy large tracts of land in portions of Quezon City, Mandaluyong City, and Pasig City (WikiPilipinas and other sources). 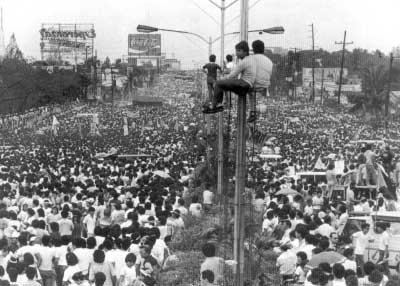 The masses of people gathering at EDSA for the People Power Revolt. Wikipedia photo

EDSA or the Epifanio De los Santos Avenuem (a non-descript busy avenue) took a crucial place in modern Philippine history in February 1986 when masses of people marched and assembled to this avenue in Mandaluyong city in support of a military-church-backed popular people’s revolt against the Marcos dictatorship.

After the Philippine generals Fidel Ramos and Juan Ponce Enrile publicly withdrew their support on February 22, 1986 from Ferdinand Marcos, who was accused of widespread cheating in the 1986 elections, the influential Catholic Church and opposition leader Corazon Aquino (later installed as president) followed suit by calling for the so-called ‘People Power Revolt’ to force the ouster of Marcos.

Nuns, church leaders, middle-class Filipinos joined left-wing activists and street protestors to face military tanks and police forces deployed by Marcos to EDSA. For several days, the 24-hour peaceful vigil protests and prayer rallies were held on EDSA, near the military complexes Camp Aguinaldo and Crame where Enrile and Ramos were holed out, ignoring the arrest warrants issued by the Marcos government.

Three days later on February 25, Marcos, with US help and intervention, fled to Hawaii with his family to escape charges of corruption, human rights abuses and siphoning off the country’s wealth. Aquino was also sworn to presidency on the same day to bring home the message to the Marcoses of their illegitimate claim  to power.

What was later called the EDSA Revolution is annually marked every February 25 near the crossing of Ortigas Avenue and EDSA , but the bouyant spirit and hope for genuine change kindled among Filipinos during the days following the Marcos ouster fizzled out when it became apparent that little has changed (even up to now) in the lives of the average Filipino.