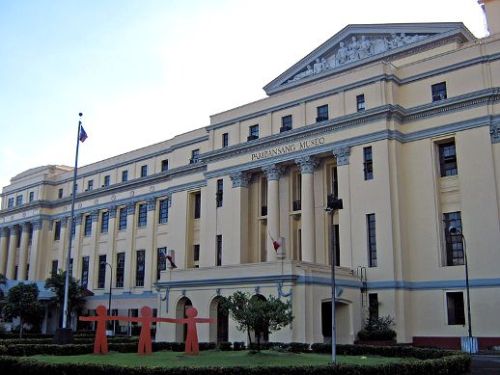 The adjacent building in the Agrifina Circle of Rizal Park, formerly housing the Department of Finance, houses the Anthropology and Archaeology Divisions and is known as the Museum of the Filipino People. At the National Art Gallery masterpieces such as Juan Luna’s Spolarium is displayed in one of the central halls. Contemporary and modern art exhibits are also regularly held at the gallery.

Burnham’s design recalls neo-classicist architecture and was part of the extensive city planning of Manila designed to renovate the capital during the early days of the US colonial era. In World War 2 the National Building and other landmark buildings in downtown Manila and Intramuros were destroyed and badly damaged during the carpet bombing of the Allied Forces in their efforts to defeat the retreating Japanese Army. Post-war reconstruction efforts of these landmarks buidlings were partly financed by both US and Japanese governments. (From: Wikipedia and other sources)