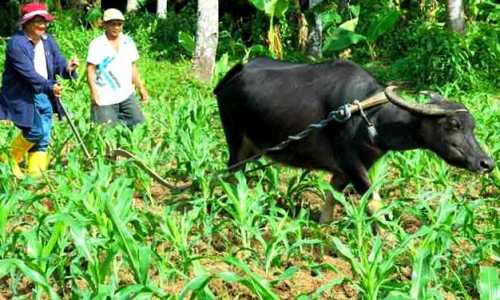 The kalabaw (English: carabao Malay: kerbau) is the Filipino farmer’s indispensable helping hand, a so-called ‘lowly beast of burden” that is identified with Philippine farm life and the countryside.

Carabaos, a domesticated subspecies of the water buffalo (Bubalus bubalis) are native to Southeast Asia. Adult carabaos weigh 700 to 800 kilograms—almost 2,000 pounds—and have fairly long gray or black hair thinly covering their huge bodies (Wikipedia). Water buffalos have been domesticated in the Philippines as far back as pre-Hispanic times and carabao skin was once used extensively in the Philippines to create a variety of products, including the armor of pre-colonial Filipino warriors.

No Filipino countryside scene is complete without the carabao. The animals were also exported from the Philippines to Guam in the late 1600s during the Spanish colonial administration of Guam. They were used for farming and to pull carts. In the 1960s, carabao races were also a popular sport in the Philippines especially during fiestas, but the practice is rarely seen these days.

Although there is no ordinance designating the kalabaw as the country’s symbol, the beast is often portrayed or identified with Filipino resilience and nationhood and is often used or portrayed in postal stamps, coins, government seals and other logos.  In the late 1980s, the carabao puppet character Kardong Kalabaw became popular as a symbol of the Filipino people’s hard work and sense of industry.