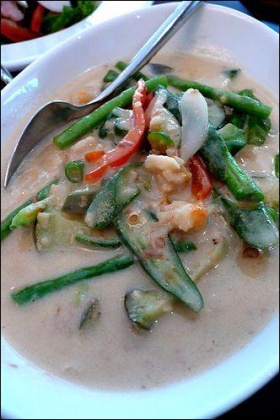 Bicol Express (in Bicol called sinilihan) is the name of a popular spicy Filipino vegetable dish. Bikol Express was coined or popularised by restaurants in Malate, Manila but is made in traditional Bicolano style (From Wikipedia).

The dish is a stew made from long chilies (siling mahaba in Tagalog or lada panjang in Malay/Indonesian), coconut milk, shrimp paste or stockfish, onion, pork and garlic. It is said to have evolved from gulay na may lada, another Bicolano dish which is nowadays also presented as one of the many variants of Bicol Express.

WikiPilipinas attributes the name Bicol Express to restaurant owner Cely Kalaw. Kalaw supposedly coined or named the Bicolano after the train that travels from Paco Station to Bicol. Some historians said Indonesian traders were active in the  Bicol region in pre-colonial Philippines, and the dish could have been one of the influences that Indonesians left to the natives.