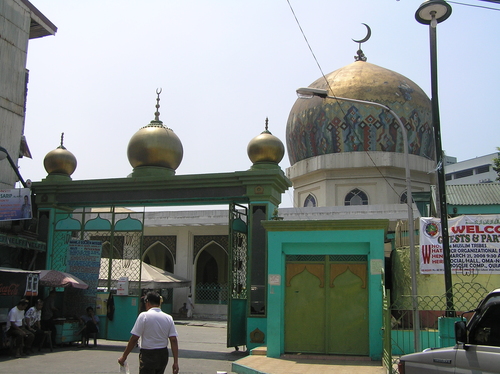 The Masjid Al-Dahab, popularly known as the Golden Mosque, is the biggest religious centre for Muslims living in Metro Manila.

The mosque also reflects the Islamic legacy in the Philippines particularly in old Manila where the early pre-Spanish settlers were actually Islamic rajahs and sultans and their tribes who originally came from southern Philippines.

Built in 1976, the masjid was called the Golden Mosque because of the colour of its dome. Located in Quiapo district, the mosque stands only a few blocks from the Quiapo Church, also one of the biggest Catholic churches in the country.

The mosque was built during the regime of President Ferdinand Marcos under the supervision of First Lady Imelda Marcos and was completed in time for the planned state visit of former Libyan strongman Muammar al-Gaddafi (from Wikepedia). Although Gaddafi’s visit was cancelled, the mosque remained and eventually became the largest mosque and Islamic center in Manila. The mosque stands next to a sprawling, densely populated slum district where mostly Moslems and ethnic migrants from Mindanao live.

The Golden Mosque can accommodate 3,000 worshipers. Although the structure is in urgent need of massive reconstruction and repainting, the blue-turquoise tiled mosaics are among the building’s distinctive features.