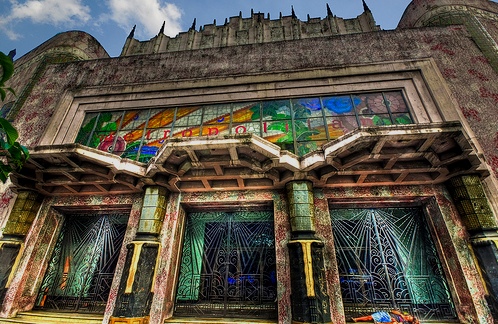 Entrance and facade of the Manila Metropolitan Theater

The Manila Metropolitan Theater, located in central Manila near the Main Post Office is one of Manila’s finest examples of Art Deco period buildings. Designed by Filipino architect Juan M. de Guzman Arellano, the faint pinkish rose-colored theatre, built with a seating capacity of 1,670 (from Wikipedia), formally opened on December 10, 1931.

The landmark building is noted for its refined sculptures on the façade which were designed by Italian sculptor Francesco Riccardo Monti, who lived in Manila from 1930 until his death in 1958. Monti worked closely with De Guzmán Arellano and created highly stylized relief carving of Philippine plants executed by artist Isabelo Tampingco. The elegant sculptures  decorated the lobby walls and interior surfaces of the building.

During the end of World War 2 in 1945, heavy bombardment by US forces seriously damaged the theatre and destroyed the colonaded northern wing, the original roofing, walls and relief sculptures. Even after post-war reconstruction funded by the US, the theatre never recovered its original grandeur and gradually fell into disuse in the 1960’s. The building was restored in the 1970s but again fell into neglect.

A bus terminal and parking building has recently been constructed at the back of the theatre by the city government to generate funds. The city of Manila, with the help of the National Commission on Culture and the Arts is planning a rehabilitation of the theatre after the public opposed plans of city officials to demolish the theatre and build a mall complex on the site.

Ownership disputes between the city administration and the Government Service Insurance System continue to the detriment of the theater’s proper use and upkeep.