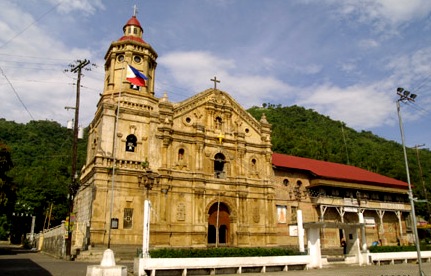 Pakil Church or the Pedro de Alcantara Parish Church in Pakil, Laguna (Luzon island, northern Philippines), was built in 1767 after 35 years of construction. In 1788, the Virgin of Turumba was enshrined in this church. The church’s architectural design has Corinthian and Ionic styles or elements.

Despite calamities such as earthquakes and World War II, Pakil Chuch has survived with most of its architectural features still intact. Along with the rectory, a fire damaged the church in 1851. Repairs were done in the same year. The church survived two earthquakes in 1881 and 1937. Fourteen icons grace its main altar with the Archangel Michael towering above the others. Each icon is housed in an elaborately carved niche in Spanish colonial style.

Although the interior of the church has been renovated recently, the design of the church remains basically the same.  The church belfry has four small bells and one huge bell. Today, Pakil Church is now a major tourist destination in Laguna province.