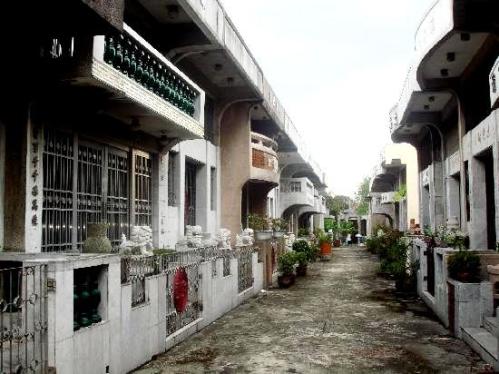 The Chinese Cemetery in Manila is known for its big musoleums and tombs that the whole cemetery complex resembles a city rather than a graveyard.

Practically all alleys in the complex look more like streets lined with luxe two or three-storey apartments and elaborate Chinese temples, that the cemetery regularly attracts its share of curious visitors and tourists.

Built in the late 19th century, the Manila Chinese Cemetery is the second oldest cemetery in Manila after La Loma Cemetery. It was built as the graveyard for Chinese citizens who were denied burial in Catholic cemeteries during the Spanish colonial period.

The cemetery was also  a witness to many executions during World War II such as Girl Scouts organizer Josefa Llanes Escoda, literary geniuses Rafael Roces and Manuel Arguilla, and star athlete-turned-guerrilla spy Virgilio Lobregat (Wikipedia). Apolinario Mabini, considered a national hero, was buried in the cemetery before his remains were transferred to his birthplace in Batangas.

Cemeteries in the Philippines are capsules of history as they were either places of execution during the war years or are the final resting places of famous political or national figures.