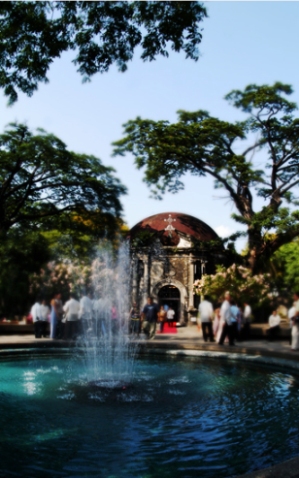 Paco Park is one of the few oases of serenity in the bustle of Manila. The park is actually a municipal  cemetery during the Spanish colonial period, built for the Spanish elite that lived in Intramuros. Although built in the late 1700s it was completed several decades later. The cemetery was later used to inter victims of the cholera epidemic that swept Manila in 1822.

The cemetery, circular in shape, has an inner circular fort that was the original cemetery and contains the burial niches that were placed within the hollow walls. A second outer wall was built with the thick adobe walls, that served as defense for the Japanese army when they used the cemetery as an ammunition depot during World War 2.  The Chapel of San Pancratius is located at the back of the park and mass is celebrated at the Chapel on Sundays. It is a  popular venue for weddings.

Remains of Spanish governors and the elite were laid to rest in the Chapel of San Pancratius. Today, only the remains of Governor-General Ramon Solano are still in the chapel. The Philippine national hero Jose Rizal was also secretly buried in the cemetery after his execution on December 30,1896. His remains were later transferred on August 12, 1912 to the monument in Rizal Park. Paco Park is also the final resting place of Mario Gomez, José Burgos and Jacinto Zamora, three Spanish priests that were executed by the Spanish in 1872 for their participation in an uprising against Spain.

The Park has century-old acacia and frangipani trees, a large fountain and well-kept walkways. Since the Marcos administration free cultural concerts are presented every Friday during the summer months. Open and free to the public, these open-air concerts are among the few pleasant freebies for Manila residents and visitors who enjoy the greenery and the sunset while listening to classical music.